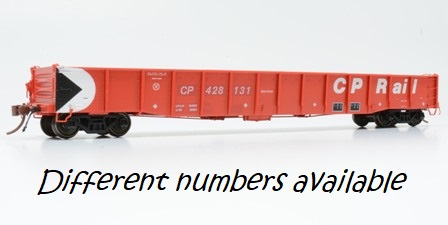 This 52’6” mill gon was produced starting in 1943 and continuing through the 1950s for several Canadian railroads.

These cars and others almost identical to them were built in large numbers by National Steel Car (Hamilton) and Eastern Car Company (Trenton). Our mill gon was used in general service and travelled widely throughout the United States and Canada well into the 1980s. Many remain in company service today!

Based on cars used in the U.S. and Canada since their construction between 1943 to the 1950s, prototypes for the Rapido Trains HO Scale 52′ 6″ Canadian Mill Gondola was one of Canada’s most widely used gondolas of the transition and classic diesel era. Based on cars built by National Steel Car (Hamilton, Ontario) and Eastern Car Company (Trenton, Nova Scotia), these detailed Canadian Mill Gondolas feature ends that drop down nice and flush, rivets on the sides of the posts, full underbody detail including bleed valves, full interior and die cast metal floor and rebuilt trucks on some later cars.